Established in 1962, Summerheights Golf Links is family owned and operated, featuring 36 holes, leading and excelling in the ever changing golf environment, while providing the most entertaining and enjoyable golf experience

Summerheights is a 36 hole layout on South Branch Road in the north end of the city of Cornwall, Ontario and it remains family owned and operated by Rory and Kathy MacLennan. Over the past 54 years the course has hosted countless tournaments, welcomed celebrities and most of all welcomed golfers to have the opportunity to learn and love the game of golf.

Rory was just four years old when his father Dwayne and Uncle Ken decided to build a golf course in Cornwall, back in 1961. For many years, the MacLennan family farmed in the area along with their neighbors, the Neil family. In 1936 a financial arrangement resulted in the Neil family trading farms with Dwayne’s uncle Elwyn, leaving the MacLennan family with a larger property including a larger farmhouse. Dwayne and his brother inherited the farm from their uncle in the mid 1950’s and after several years of farming that did not do a lot to improve their finances, they tried to consider what else they could do. At that point, Ken was a member of the Country Club while Dwayne played golf around the area. Probably with that in mind and knowing the state of the farming industry, Dwayne’s wife Jean suggested they build a golf course.  There were more than a few people who doubted the success of another golf course in the St. Lawrence Seaway town. People said the town was not big enough to support another golf club beyond the private Cornwall Golf and Country Club. Even their own lawyer recommended against their proposal. The meeting did not go well, they were told it was a waste of good farmland, a response the brothers did not want to hear. After Dwayne and Ken left the lawyers office, Dwayne turned to Ken and said “We better find ourselves another lawyer”. Undeterred by the advice of others, the brothers moved forward and opened a nine hole course on July 23rd, 1962. It was a tough go at first and with little income Ken sold his share to Dwayne in 1963. Dwayne worked hard on the course while holding down other jobs just to support his family. Despite the situation, Dwayne knew there were few options for local golfers and with constant improvements the golf course got busier each year making his golf course one of the finest public facilities in the region.

Son Rory, remembers working in the pro shop at the tender age of 13, earned his business credentials from St. Lawrence College in Cornwall followed by Turf Management certification from the University of Guelph. From there he joined with his dad and together, they began the process of making Summerheights grow in both size and popularity. Working side by side Dwayne and Rory agreed that an expansion to 18 holes was needed to stay ahead of the competition. “We either watch people go to other courses or do more to keep them here” said Dwayne, so in 1979 they expanded to 18 holes and turned the farm house into a new clubhouse of 5,000 sq ft with complete kitchen and banquet hall. Before long the family was making changes again and further expansion created the third nine hole course in 1987 followed by the final nine holes in 1997 that led to the current 36 hole configuration. To make this transition easier the family employed the services of Toronto based architect Robert Heaslip. The relationship between them and Heaslip proved very critical in the course design, as they were able to share their knowledge of the land with the designer to create holes that they were all satisfied with. The process of growing a facility to this size can be awkward and through the insight of the family and the architect they were able to rearrange golf holes to create the best configuration that would result in the South Course and West Course, the two eighteen hole layouts that now invite so many golfers to play. Rory always joked with his dad that it took him 36 years to build 36 holes. Over the years the clubhouse has doubled in size to 10,000 Sq ft to accommodate the many golfers and tournaments over the years.

In 1983 Rory married Kathy and she joined the family business in all aspects of the business. Not one to pass up on family traditions, the whole MacLennan family is still active in the family business. With a third generation of MacLennan’s, their daughter Katie MacLennan Andrews and husband Nathan Andrews who is now the superintendent all play an important role in the daily operations of the golf course. Katie took on line classes from Selkirk College in F&B Management, Tournament & Special Event Planning, Golf Shop operations and Overview of Golf Shop Operations while Nathan went to Guelph University and took the Turf Management Short Course and online classes from Selkirk College. Without the dedication and support from their family and the experienced staff, Summerheights could not have blossomed into the successful family business it is today.

In 1996 Summerheights was chosen as Small Business of the Year by the Cornwall Chamber of Commerce and in 2004 received national recognition by the National Golf Course Owners Association as Member of the Year. Summerheights has also been recognized as the favorite golf course in the Readers Choice Awards in the community for the past 19 consecutive years. The golf club would not be what it is today without the support from our community over the past 54 years. Our 3rd generation golf course has grown, in no small part, thanks to the community of customers and friends who have visited and supported us through the years.

Both of Rory’s parents have passed away and but their legacy remains firmly intact at Summerheights. Part of the 50th Anniversary Kick Off Celebration in 2012 the South course was remained the MacLennan South Course in Dwayne’s honor, together with the West Course being renamed the Matheson West Course after his wife Jean (Matheson).

With the family first mentality at Summerheights the club continues to move forward with both Katie and Nathan immersing themselves into the business, Rory and Kathy are both looking at slowly stepping aside and letting the younger generation move forward and flourish newer and fresher ideas. The recent years of the challenging economy has tested us but we will do our best to be at the top of our game.

There are over a dozen golf courses within 45 minutes of Cornwall but Summerheights remains one of the more popular links to enjoy a round of golf. Why? It is run by a family and when you arrive, you become part of that family.

Join as of Sept 1st, 2020 and start playing immediately. Thats right, you can start... 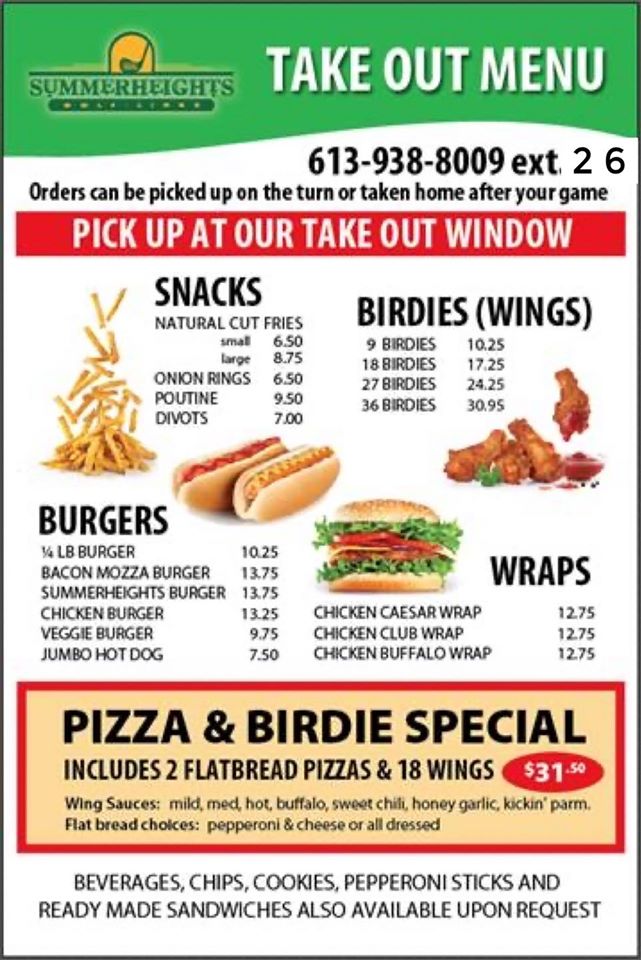 Take out now available on Thursday & Friday 2 pm to 6 pm and Saturday ...